"Had the Blessed Sandals of Prophet Muhammad [Peace be upon Him], been placed upon my head, Then I would proclaim that I to, am a fully crowned king [Ala-Hazrath, Radhi Allah Anhu]" 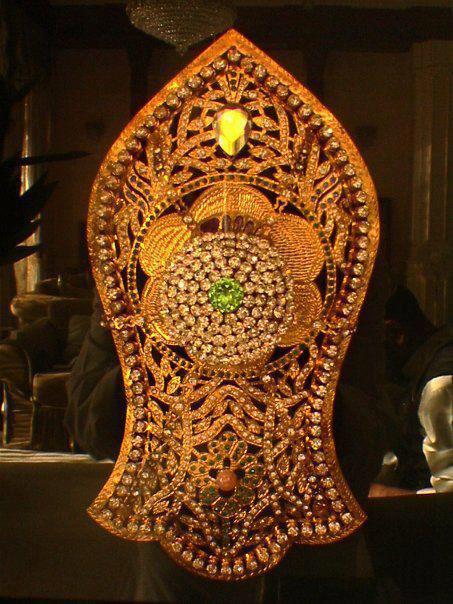 THE BLESSED SANDALS OF PROPHET MUHAMMAD Peace be Upon Him
Scholars of all ranks, from the East and West, Arabs and non-Arabs have drawn images of the blessed shrine and sandals [na’al] of the prophet  and have kissed them and placed them upon their eyes and heads and have ordered others to do so. ‘Allama Abu’l Yuman ibn ‘Asakir, Shaykh Abu Ishaq Ibrahim bin Muhammad bin Khalf Salami and others have written books purely on this issue and Fath al-Muta’al fi Madh Khayr al-Na’al of Allama Ahmad Maqtari is comprehensive in this regard. May Allah grant them a good recompense and peace by virtue of the blessed sandals, Ameen.

(1) The Muhaddith, ‘Allama Faqih Abu’r Rabee’ Sulaiman bin Salim Kala’i rahimahullah says:
Oh the one who looks at the blessed sandals of the prophet  – Kiss this image without any pride [Jawahir al-Bihar, 3:163].

(2) Qadi Shams al-Din Saif Allah Rashidi writes:
The one who touches the image of the blessed sandals of the prophet  will get unmeasured goodness on the day of judgement and indeed he will live in utmost pleasure. Hence, to get this wish on that day, kiss this honoured relic at once.

(3) Shaykh Fath Allah Bayluni Halani, contemporary of ‘Allama Maqri, writes:
Oh blessed sandals of the leader of the prophet . I have witnessed that your image contains those secrets that have extraordinary blessings. One should rub his face on this image with humility and fulfil the rights of this sacred image that are necessary upon him.
He also says:
Put your hands forward to kiss the image of those blessed sandals that have touched the prophet . Accept the reverence due to them with your tongue and with a pure belief of the heart, place it upon your eyes and kiss it. Openly send salawat upon the prophet  and do this action time and again.

(4) Sayyid Muhammad Musa Husaini Maliki, contemporary of ‘Allama Fath Allah Bayluni, writes:
There is such blessing in the image of the blessed sandals of the best of creation  that if you place it on your face with a pure intention, you will be granted your desire.

(5) Muhammad bin Farj Sabti writes:
Oh my face, kiss it as this is the image of the sanctified sandals. Seek remedy by kissing it so that your illness is removed.

(6) ‘Allama Ahmad bin Maqtari Talmasani, author of Fath al-Muta’al writes:
How dignified the image of the blessed sandals is which is more elevated than the whole world. Glad tidings to him who kisses it and expresses his intense love [Fath al-Muta’al].

(7) ‘Allama Abu’l Yuman ibn ‘Asakir writes:
Kiss the image of the blessed sandals because even if you get to kiss this, then what an honour this is.

(8) ‘Allama Abu’l Hakam Malik bin Abdu’r Rahman bin ‘Ali Maghribi, who has been called Ahad al-Fudala al-Maghariba [one of the accomplished people of Maghrib] writes in his Madhiya:
I befriend the blessed sandals of my beloved  and day and night I kiss it [Sharh al-Zarqani, 5:57].

(9) Imam Abu Bakr Ahmad ibn Imam Abu Muhammad ‘Abdullah bin Husain Ansari Qurtubi writes:
I concentrated on the waves of light that emanated from the blessed sandals and as long as we bow down them, we will be honoured. Hence, keep it above the head as it is in reality a crown and apparently a sandal [al-Mawahib al-Ladunniya, 2:470].
The above mentioned translation has been praised in Sharh Mawahib and the scholar has been remembered as a Faqih, Muhaddith, expert, eloquent, pious and unmatched.

(11) ‘Allama Zarqani commentates on this by writing:
If possible, kiss the dust that has been touched by the sandals, otherwise, kiss an image of the sandals [Sharh al-Zarqani ‘ala’l Mawahib, 5:48].

(13) Sayyidi ‘Allama Muhammad bin Sulaiman Jazuli, author of Dala’il al-Khayrat, has also followed ‘Allama Fakihani and has included the image of the blessed shrine in his Dala’il al-Khayrat and writes in its commentary Kabeer that:
I have followed Shaykh Taj al-Din Fakihani by including it. He included a chapter in al-Fajr al-Muneer about sacred shrines and mentioned this in its benefits [Sharh Dala’il al-Khayrat Juzuli].

(14) Similarly, ‘Allama Muhammad bin Ahmad bin ‘Ali Fasi writes in Mutala al-Musarrat Sharh Dala’il al-Khayrat that:
He said that the author rahimahullahi ta’ala included the chapter regarding the blessed shrine and sacred graves after the chapter of names following in the footsteps of Shaykh Taj al-Din Fakihani because in his book al-Fajr al-Muneer he included a chapter on the sacred shrines. In this chapter, he mentions one benefit that whoever cannot see the actual shrine should see the image of the sandals and kiss it and show deep love for it. The scholars have written that the respect for the image is the same as for the actual and he has written that scholars have experienced the blessings of this [Mutali’at al-Musarrat, p.144]

The one who received two Morsels from where You leave Your Shoes, Becomes so great, that an Entire Kingdom would survive on his mere spittle!

Motivated by this love, as well as by an understanding of the immense importance of the personal example of the Prophet (Allah bless him and give him peace), the Muslim community recorded and preserved his entire life in the most exacting detail. The Islamic scholars did not limit their attention to the moral and legal example of the Prophet alone (Allah bless him and give him peace). Rather, they also focused on his daily life, like his habits of eating, drinking, and sleeping, as well as other matters that do not have immediate legal implications. From that time, until this present day, Muslims have sought to imitate the example of their Prophet (Allah bless him and give him peace) in all its details, unless they were of the particular matters that Allah Most High chose only for him.

The Prophet’s (Allah bless him and give him peace) external, physical appearance was also among the matters that Muslims paid great attention to, as were his habits of dress. Among the matters of external appearance, the Prophet’s noble sandals received particular attention, perhaps because of what his followers felt of utmost love and humility for the person of their beloved Prophet (Allah bless him and give him peace), such that they saw themselves as less than his sandals.


The Companions and the NobleSandalsThe attention given to the noble sandals is not an innovated matter. Rather, the first generations, from the Companions of the Prophet (Allah bless him and give him peace), were the first to give them attention and importance, such that some of them were known to have distinguished themselves with serving the noble sandals. It has been reported by Ibn Sa`d that Anas (Allah be well pleased with him) was the keeper of the sandals of the Messenger of Allah (Allah bless him and give him peace).

The Attention Given by the Imams and Scholars to the Noble SandalsA number of Imams gave the noble sandals of the Prophet (Allah bless him and give him peace) particular attention, authoring complete works in describing and praising them, and gathering that which was transmitted regarding this. Among them were:

Writers and poets wrote eloquently in praise of the noble sandals and in describing the feelings of ecstatic love for their wearer (Allah bless him and give him peace). Imam Abū al-`Abbās gathered a significant amount of these writing in his aforementioned work, as well as in his treatise Azhār al-Riyād