ISLAM... 'the religion of peace' 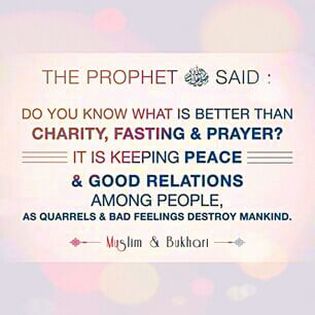 What is Islam? Islam has roots in the faith of Abraham,Peace be Upon Him, who called people to worship One God, and is often referred to as one of the ‘Abrhamic’ (monotheistic) faiths, together with Judaism and Christianity. Like the Bible, the Qur’an mentions prophets, angels, miracles, good and bad deeds, reward and punishment, repentance and forgiveness, Heaven and Hell, Adam and Eve,(Peace be Upon Them) the Torah and the Gospel and many other things that are familiar to Western tradition. The word ‘Islam’ comes from the Arabic word ‘As Salaama’, meaning ‘peace’ and ‘submission’. The essence of Islam is that one should acknowledge the Creator and submit to His guidance, which leads to peace and fulfillment in this world and the Next. Muslims believe that Divine guidance has been sent to all peoples on earth at one time or another. God’s guidance has been carefully preserved for the benefit of people today in the Qur’an, Islam’s holy book, and the Sunnah, or personal example of the final Prophet, Muhammad (peace and blessings be upon him).

Allah, the Arabic name for God.The only word in Arabic for God, the Creator and the Sustainer of the Universe, is ‘Allah’, and it is used by Arabic-speaking Christians and Muslims alike; it is not the name of a different God. Ninety-nine additional names of Allah are mentioned in the Qur’an; these refer to Divine attributes such as the Almighty, the Ever-Living, and the All-Knowing, and server to define the Islamic understanding of God. The most important and frequently mentioned of Allah’s names are ‘Most Compassionate’ and ‘Most Merciful’

Who is a Muslim? Anyone who believes in One God and acknowledges Muhammad Peace be Upon Him, to be His last Prophet and Messenger is a Muslim. Although Islam as we know it began in Arabia and most Muslims learn some Arabic, only 18% of Muslims are Arab. Muslims come from all races, nationalities and cultures across the globe. The majority of Muslims live in Asia and Africa, but there are significant minority communities elsewhere, including China, Europe, India, United States, Canada and South America.

Muhammad the last Messenger (Peace Be Upon Him)Muhammad (peace be upon him) was a descendant of Ishmael, the eldest son of Abraham. Born in Makkah in 570 C.E (A.D), he was orphaned at an early age, and was raised at first by his grandfather and then by his uncle. The young Muhammad (Peace be upon Him) made a name for himself because of his trustworthiness, sincerity and generosity, and his advice became sought after in arbitrating disputes. At age 25, he married Khadija,(May God be Pleased with Her )and honourable and trustworthy businesswoman.They were blessed with two boys and four girls.

Prophet Muhammad’s (Peace be Upon Him) early followers were mostly young and poor and were bitterly persecuted. They emigrated in search of religious freedom, and were first welcomed in Christian Ethiopia and then, in greater numbers, to the town of Madinah, 260 miles north of Makkah (in Saudi Arabia). This second emigration in 622, which established Muhammad (Peace be upon Him) as the local ruler and enabled the Muslims to settle down, marks the beginning of the Islamic calendar.

Inspired by the example of a leader who some historians consider the most successful and influential man of all time, Islam spread from Arabia to Spain, Africa, Asia and China within just a century of his pass away has touched the hearts and lives of hundreds of millions since.

What is the Qur’an? The word ‘Qur’an’ means ‘the recitation’ or ‘the reading’, and the first words revealed to the Prophet Muhammad (Peace be upon Him) were ,"IQRA",‘Read (or recite), in the name of your Lord!’ Previous Scriptures had mostly been written and passed down by elite circles of scribes and priest, but the early Muslims were encouraged to learn the Qur’an by heart as well as to learn to write it, regardless of gender or status. It is now the most-often read book in the world, and the only Scripture that can be memorized in its entirety by people of all ages and abilities, including non-native speakers.

The Qur’an is the principal source of Muslim faith and practice. It is a guidebook dealing with all subjects that concern human beings, from faith and worship, to community and relationships, to economics and even physical science, but its main theme is the relationship between God and His creatures. Unlike the Bible, which includes historical records, poetry, legal ruling, proverbs and the teachings of various prophets, the Qur’an is simply a word-for word record of the Divine Revelation entrusted by God to the Prophet. Other texts, such as Muhammad’ (Peace be upon Him) own sayings, his biography, historical records, and the inspired writings of the early Muslims are preserved in separate books, in order to avoid any confusion with the word of God.

The scientific accuracy of the Qur’an has in the last decade attracted much attention, as it contains statements about aspects of embryology, astronomy, and geology that could not have been known to humans in the 7th century, and in many cases have only recently been verified. This has led to a number of distinguished scientists to embrace Islam, and is considered by Muslims to be another proof of its miraculous nature, as it is often said that ‘The miracle of Muhammad Peace be Upon Him, is the Qur’an’.